*This is the first of my guides to Cambodia

Let’s start with some general pointers about Cambodia.

One of the differences between Cambodia and Australia that I’ve been reminded of now that I’m back home is how friendly the Khmer people are. (In case you weren’t sure, residents of Cambodia refer to themselves as Khmer, not Cambodian. The same goes for the language they speak.) While often they may look at you seriously, if you smile, they will smile back nine times out of ten. You try that in Melbourne, and people may think you’re a little too friendly.

When travelling in the regions where tourists aren’t so common, you’ll often have Khmer children call out ‘Hello’ as you pass - occasionally the adults will do the same. If they speak any English, you’ll be asked what your name is, how old you are, and often whether you’re married or not. 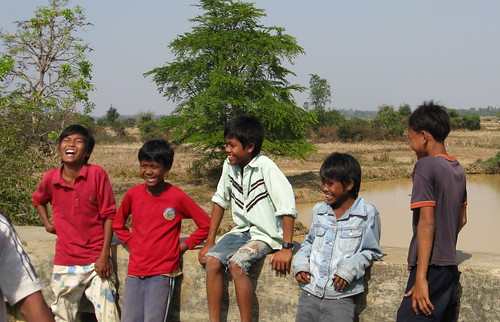 The age question has some importance to Khmer - because the older you are, the higher status you have. You refer to people older than you as Bong, and those younger as Ohn - and if you’re not sure whether they’re older or not, err on the side of caution and go with Bong.

Other factors to status include gender - males ranking higher, unsurprisingly - and race. If you’re a white-skinned Berang (Westerner), that’s instant kudos, which means white women get much more respect than local Khmer women.

Status also determines how people will greet you. If you’re much senior, you’ll often get polite bows with hands pressed together as if praying - the more friendly restaurant staff will often greet and farewell you with this.

If you want to be a bit more informal, handshakes are recommended - and some Khmer men will press for one anyway, especially if you’re white-skinned and male, seeking to get chummy with you. 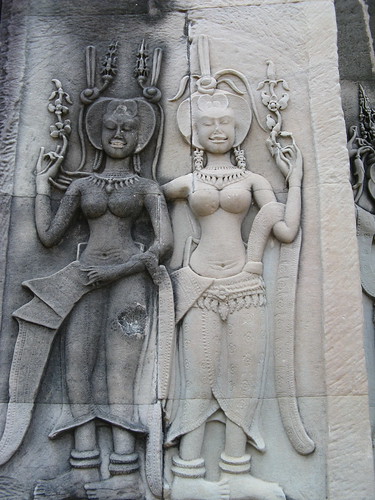 Now, I’ve not read too much about the history of Cambodia, so don’t expect much detail here. I can provide a very brief overview though.

The Kingdom of Cambodia - or a Khmer nation in some form and name - has been in existance for around 1200 years. At one stage in the middle of the last millenium, it was the largest nation in South East Asia, covering at least parts of Laos, Vietnam, Thailand, Malaysia and Indonesia.

Much more recently, it was ‘colonised’ by the French, as part of French Indochina from 1863 up until 1953, when it became a constitutional monarchy. After the Vietnam War, the combination of bombing by the USA and the rebel communist Khmer Rouge drove the country into civil war, with the Khmer Rouge taking power in 1975. Vietnam invaded in 1978 to put a halt to the genocide (somewhere between one and three million were killed - including a high percentage of the more educated Khmer, such as teachers and doctors), but warring continued until the late 1990’s.

In the last decade or so, the country has returned to being a constitutional monarchy. The Cambodian People’s Party has held power ever since the first elections, and holds a massive majority. While the locals rarely discuss politics, it’s quite well established that there’s plenty of corruption within the government. If you’re friends or family of those in power, your living conditions are leagues ahead of the vast majority of the population.

These days, you really don’t need to be worried about violence - well, not in the heavily populated areas. Apparently things get a bit hairy in the jungles with fighting between police, poachers and rangers, and there is the on-again-off-again border dispute with Thailand in the Preah Vihear province, but outside of those regions, things are quite safe.

Onto something a bit more utilitarian: money. The Cambodian currency is called the Riel, and it’s worth roughly one fortieth of a US cent. An easier way to think of it is 4000 riel is 1 US dollar. While the Australian dollar is the currency I normally deal with, I’m sticking with USD references here because that’s the secondary currency in Cambodia - you’ll be able to work with that 4000-to-1 conversion rate in restaurants, hotels and such.

The official conversion rate is something closer to 4120 riel to the dollar, but you’ll only find people using that when you’re changing money, or if you happen to be buying phone credit (since that’s a pretty close parallel to currency in Cambodia anyway).

Because of how cheap (compared to Western countries) most things are, you can’t expect most places to handle $20 and $50 dollar notes, unless you’re paying them large amounts of money anyway. Close to markets you’ll find money changers, and you should get the official rate - which means you’ll score some extra riel.

If you’re only going to the tourist-centric cities - Phnom Penh and Siem Reap - then you won’t need to worry about learning Khmer. A growing number of the population can speak at least some English, and for the rest, you’ll get by easily with sign language. That said, if you know a few local phrases - beyond Socksabye (How are you?) and Oarkun (Thank you) - you’ll often get a good friendly laugh in response, as the vast majority of visitors just don’t make an effort.

I’ll be covering a lot more of the language in the next post, so stay tuned.

Ah brings back great memories. I loved our time in Cambodia, look forward to going back.

Ah Patski, Pov mentioned yesterday that you haven’t called yet and on the weekend when Cam gave Reaksmey another web lesson he said to pass on his regards. Feel up to practicing your Khmer skills with the real deal?

OMG! I’m Cambodian. I was born in the U.S. though. I’ve been to Cambodia about three or four times. My cousin’s family is going this summer. Lucky… :(( I would really love to go again. :)) .

Prior to this: Victorian Bushfire Appeal