I think everyone is happy to have 2020 out of the way - certainly, I’m personally very glad it’s over. It’s been a tough year for me, even though I’ve had it extremely easy compared to most others.

And while there has been a tonne of chaos and pain, I’ve been lucky enough to find moments of delight in others’ art and creativity - so I wanted to highlight a bunch of those as my favourite things of an otherwise terrible 2020.

Many people dove into sourdough during lockdown, but for me a main focus was rebuilding a habit of regular reading. I used to be a voracious reader, but as I lost regular long commutes (and gained a smartphone) my reading became far more inconsistent.

I set a target of 25 books for 2020 early on in the year on The StoryGraph (which I highly recommend - especially for those looking to step away from the Amazon-owned Goodreads). It was touch and go, but I reached my goal on the final day of the year.

Some of my favourites include:

Also: check out the beautiful statistics The StoryGraph has given me for the past 12 months of reading! 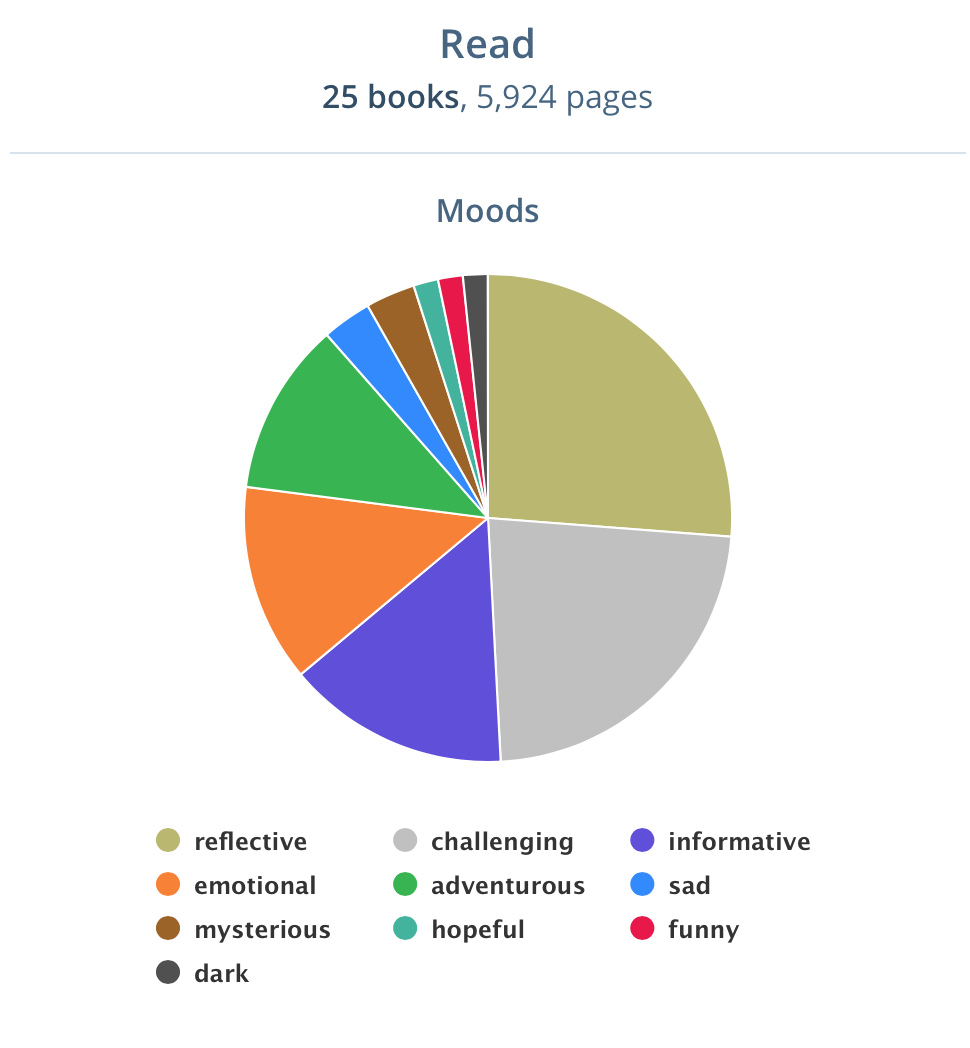 Music is always something I embrace, though certainly the pandemic has removed regular gigs from my life. I’m grateful that many musicians have still found way to record their performances, including Michael Kiwanuka for npr’s Tiny Desk series:

… Elbow’s elbowrooms series of songs, including one of my favourites, Great Expectations:

Oh, and though Christmas has already wrapped up, I’m stoked that Casey Bennetto, Geraldine Quinn, and The Bella All-Stars recorded their annual A Swingin’ Bella Christmas show for streaming, given attending in person wasn’t an option. As I’ve stated previously, it is the best thing about Christmas, and is such a clever and joyous collection of original tunes and carols.

There have also been recent albums I’ve been happily playing on repeat from Thelma Plum (Better in Black) and Ólafur Arnalds (some kind of peace). Last.FM has the finer details of my listening habits, should that be of interest.

Related to this: I also built a little website that takes your streaming habits and then at the start of each month suggests albums for you to buy (to better support musicians - always, but especially in these COVID19 times). It’s called Support Act, it doesn’t cost anything to use, and hooks neatly into both Last.FM and Spotify.

A few other discoveries to note:

I started watching the Netflix series of She-Ra in 2019 (when I needed something wholesome in the wake of the depressing results from Australia’s Federal Election). This year brought the fifth and final season, and it is glorious. Yes, it’s aimed at an audience younger than myself, but I’m so glad that didn’t stop me.

The Melbourne Writers Festival, like many other events, was entirely online this year. Their Gala event perhaps doesn’t quite sit inside the framing of this post - I wouldn’t say it brought me joy as such, and it’s quite heavy-going at times - but I found it powerful and intelligent and important.

And to wrap up with a completely different medium: I came across the platform/adventure game Gris (by Nomada Studio) this year - even though it’s been around a little while. I was immediately struck by it’s beautiful, minimal design and its intertwined theme of grief, plus the similarly excellent, stripped back soundtrack (which quickly joined my list of albums on regular rotation). It’s available on most platforms, and I highly recommend giving it a shot.

Wishing you and yours a 2021 filled with joy, good health, saftey, and many moments of calm.

Next Post: Support Act: supporting the artists you love