This could be a story about a mystery. Or it could be an adventure. Or even a tale of learning and sharing. But ultimately, it really comes down to friendship and trust. 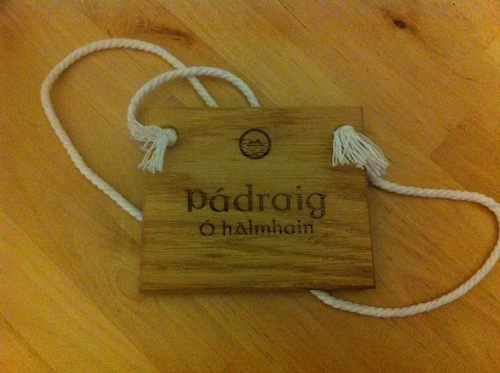 Ah, but where to start? Well, if we look back several years, it starts with my good friend James Healy, introducing me to a programming language called Ruby. That led me to the Australian Ruby community and the very first Rails Camp just outside Sydney, where I met Matt Allen. A year later, Matt Allen introduced me to Geoffrey Grosenbach at RailsConf in Portland, Oregon. A few months later, I found myself in Berlin, where through Geoffrey I met Paul Campbell of Dublin.

And then I met Paul again in Las Vegas, London, Amsterdam, Margate (for another Rails Camp), Berlin, and then finally in his home city of Dublin last year. I now consider myself lucky to call Paul a good friend, and have also had the pleasure of occasionally working with him.

Paul is a man with grand ideas, and one of those is an event he and fellow Dubliner Eamon Leonard concocted called Funconf. Every year as Paul put it together, I would consider travelling around the world to attend, but it just didn’t work out. This year, though, Paul told me the third Funconf would also be last - and so I became determined to be there for it. There were other events in in the same corner of the world I have been keen to see as well, thus it became something of a tour - four months travelling around Europe. Let’s be clear: from the beginning, Funconf was always one of the main reasons for the trip.

But what was I travelling over to be a part of? I knew that it was a conference - well, kind of: there would be some talks, close enough. And it’s a tech crowd that attends, so it’s work related at a stretch. But beyond that, Paul & Eamo weren’t talking.

When tickets were finally released, the website, gorgeous though it was, didn’t shed any light. All it asked was one question: “Do you trust us?”

My answer was always going to be yes.

Even after handing over a not inconsiderable amount of Euros to secure my place, few answers were forthcoming. Food and beds would be covered, but there was no clues as to where those beds would be, let alone what food we would be eating.

So I waited patiently, and began upon my travels. I attended conferences, I wandered through beautiful European cities, and I caught up with many friends along the way.

And finally, I arrived in Dublin at the end of August, still clueless as to what was to come. I wasn’t alone though - about a hundred others had come from across the globe. Most had been to previous editions of Funconf, but they were no more enlightened than I.

We met on Friday morning at a hotel in Dublin - some of us sporting a bit more facial hair than normal, after some tweets from Paul & Eamo - and found ourselves in a situation that felt very conference-like. There was a registration desk, hotel-catered breakfast, and a room with lecture-style seating and a PowerPoint presentation ready to go. This wasn’t what we expected! Werner Vogels, CTO of Amazon, was our morning’s speaker, and the talk was, well, just like any run of the mill conference.

We were being trolled. Or, as we’d say in Australia, Paul & Eamo were taking the piss.

The mode of transport stakes were quickly raised - because we were then asked to board a train booked just for us, with the destination being Galway, on the other side of Ireland. 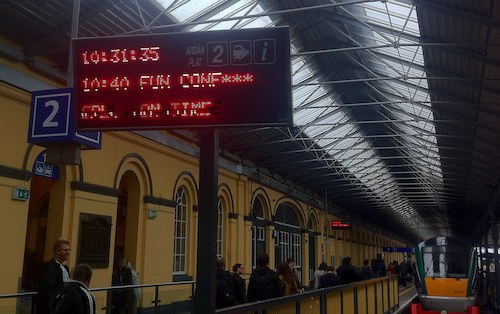 Of course, this was just one piece of the puzzle - what was to come once we arrived in Galway had yet to be revealed. That didn’t bother us much: we all revelled in the experience of the train trip, catching up with old friends and making new ones.

Buses - though nothing fancy this time - took us from the station to another hotel. Again, it was quickly clear that this wasn’t out main destination either as we were led into another function room. This time around, there were no PowerPoint slides, for we were the main attraction: an open mic and an invitation to talk for a few minutes on topics of our choosing.

While most got an opportunity to share - in some cases, more than once - others missed out: as the ideas flowed, Paul was taking a token or so people out of the room at regular intervals, and they weren’t returning. Slowly but surely, the numbers thinned until there were fifteen of us left. If I had been keeping an eye on Twitter, I would have known what was happening - but thankfully, I didn’t catch any of the spoilers. The penny dropped when we grabbed our bags and were led through the back streets of Galway to find helicopters waiting. 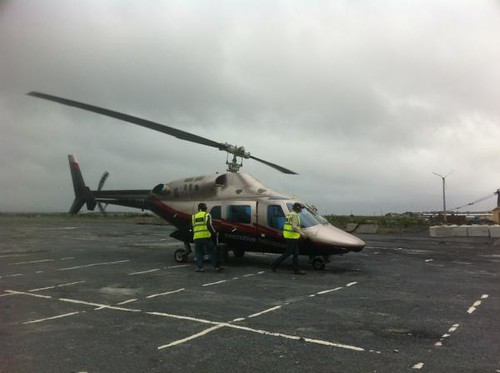 And so, we arrived in grand style at our actual destination, Inis Mór of the Aran Islands (just off the west coast of Ireland).

All this, and it’s just the journey to get us where Funconf was taking place - the support act, if you like. Of course, with Paul & Eamo planning, the journey is as important as every other aspect of the event.

From there, it was a matter of collecting our amazingly crafted badges (thanks Kilian!) and bags (thanks Kilian’s mum!), settling into a bed & breakfast, and then wandering across the island in search of food, drink and friends.

Arriving on Inis Mór marked a change of pace: not only had we reached the event location (if an entire island counts as such), but part of the mystery of Funconf had been revealed. A large question mark still hovered, though: we had no idea what the next day would contain.

But we would have to wait until the morning for that. Friday evening was set aside for dinner and socialising - a fine way indeed to bring to a close such a uniquely wonderful day.

And once Saturday morning arrived, the rest of Funconf was revealed - well, to some extent. We had our venues: the local church, a nearby hall, a pub; and we had a schedule of when to be at each. The specifics of what would happen in each location was only divulged when required.

Those specifics, for the most part, were talks, and very good ones. None were technical, all were interesting, and they were generally stories or ideas. I shan’t recount each at length, as I would not do them justice (and, well, you had to be there), but my two favourites were Michael Lopp and Tom Preston-Werner (known as rands and mojombo, respectively). Fittingly, the focus for both was the topic of trust.

But beside the talks? Well, some of us visited the imposing cliff ruins of Dún Aonghasa, some of us got drenched riding bicycles in the rain (and some of us did both), but throughout there was a constant hum of socialising. While the talks were top notch, I can say with some certainty that the main reasons everyone came to Funconf were the people and adventure.

The evening brought with it a clever talk from Derek Sivers, a rocking performance by Kíla, and much partying - but all too soon, it was Sunday morning and time for us to board the ferry back to the mainland. A subdued ferry ride was followed by buses, and then another private train returning us to Dublin in time for the BBQ after-party.

And just like that, Funconf 3 was finished. A grand success indeed, and perhaps it’s for the best that there will not be another one - for I’ve no idea how Paul & Eamo could top that, plus it makes my experience all the more special, shared with such a superb group of fellow adventurers.

Paul, Eamon: thank you ever so much. I have no regrets for putting my trust in both of you, for it was a brilliantly crafted weekend.

It was so much our pleasure to have you.

Pat, thanks for trusting us :)

I’m glad to have been the one who introduced you to Paul! I met him on a 48 hour trip to Dublin thanks to Dr. Ana Nelson. Was she there too?

Heya Geoff - I don’t think Ana was there, though Paul would know for sure.

Don’t suppose we’ll be catching you at Rails Camp in a couple of months?

Prior to this: Supporting Smart Social Enterprises in Cambodia