Getting around in Cambodia

*This is the third of my guides to Cambodia

The focus for this post is how you can get yourself from one side of the country to the other.

Unless you have your own private tourist guide, you really only have two options to get between cities - buses and taxis.

Buses are the cheap-but-slow option - you could be looking at 6 or more hours between Battambang and Phnom Penh, and a ticket is going to set you back maybe $7 USD. Phnom Penh to Siem Reap is a slightly longer journey, and Siem Reap to Battambang is shorter (around 4 or 5 hours).

Sometimes buses break down, and sometimes they’ll make a few more toilet break stops than really necessary. They are easy though - just buy a ticket, and hop on the right bus. Don’t expect air conditioning or a quiet trip - it’s likely you’ll have to put up with loud Khmer pop for the entire trip.

Taxis, on the other hand, can require a bit more patience to sort out. It’s not a formalised system like in developed countries - if someone with a car wants to be a taxi driver, then they just hang around the vague taxi point in a city, and try to lure passengers into their car. There’s plenty of competitiveness between drivers, so you could try and bargain for a seat. Don’t expect all drivers to speak English though.

Taxi drivers will try to fill up the car with as many passengers as possible. I’ve been in cars with four Khmer adults in the back seat of the Camry (almost all taxis are Camrys), two in each of the front seats (yes, the driver shares his seat), and in one case, one girl in the boot (kept open, thankfully).

If you’d like to have a little privacy, you pay more. For Battambang to Phnom Penh, $20 is a common rate for a Westerner to have the passenger seat to themselves. $10 will probably get you a seat in the back with two or three others. Westerners are generally given more space, because they have the money to pay for it.

You can also hire out a whole car if you’ve got plenty of cash or a group of people - expect to pay around $50. For the other major routes, prices can be modified depending on the distance (I’d guess around $60-70 for Phnom Penh to Siem Reap).

While finding drivers is pretty easy (your hotel or hostel may even help you source a driver), there is a good chance you could be waiting around for the rest of the taxi to fill up. Khmers are early risers, so as the day wears on, there’s less potential travellers. In some cases, I’ve waited over an hour before leaving. Of course, if you offer more money, then the driver will be happier to make the journey with less passengers.

So, for all this hard work, what are the advantages? Air-conditioning (indeed, you might actually be too cold) is the big one. The journey is much faster, too (I once did the Battambang to Phnom Penh trip in under four hours, but four to five hours is the usual length of time). You should still expect to be blasted with Khmer music (although some drivers will graciously accommodate and turn the radio down or off).

Either way, the roads aren’t fancy - and sometimes not even sealed - so don’t hope for a super-smooth ride. 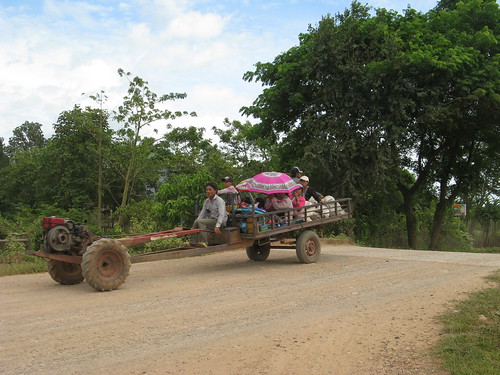 The one other major transport option is only for travelling between Battambang and Siem Reap, and even then, only during the wet season: the boat. There’s two different boats (I’m not sure if they’re run by separate companies), and one is apparently comfortable. 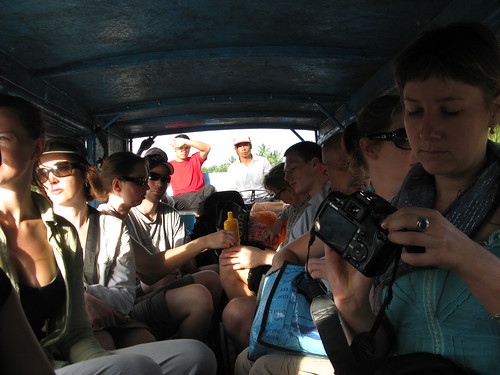 I say apparently, because I went on the other boat, which is a glorified gondola, holding about 20 people sitting on benches facing each other, with their backs to the water. The sides of this boat are low enough that you will get water flowing over the edge every now and then - nothing dangerous, but your bags may get a little wet. 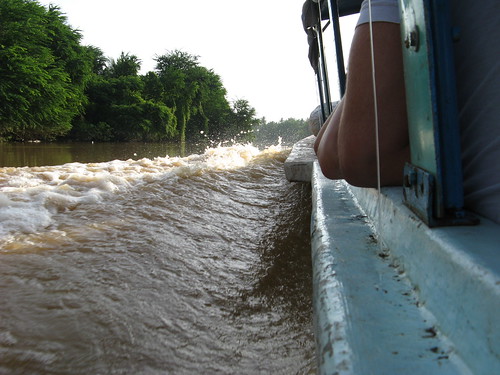 Given my description thus far, it sounds like a horrible trip - and while it wasn’t super comfortable, and did take seven hours, you do get some great views of the Cambodian countryside. The boat skirts the western edge of the massive Tonlé Sap lake, and also motors through some floating villages. It’s certainly a unique experience, and I’m glad I’ve done it once.

Unlike most cities, taxis (in their car form) aren’t used much at all in Cambodia for travelling within a city (although there is some normal taxis in Phnom Penh). What is used is a bit more old-school - tuk-tuks and motos. Motos are scaled down motorbikes - not quite as powerful, and not quite as large. Very similar to motorized scooters, if a little bit more motorbike-like. Tuktuks are motos with a little carriage on the back, which can fit four Westerners reasonably comfortably. 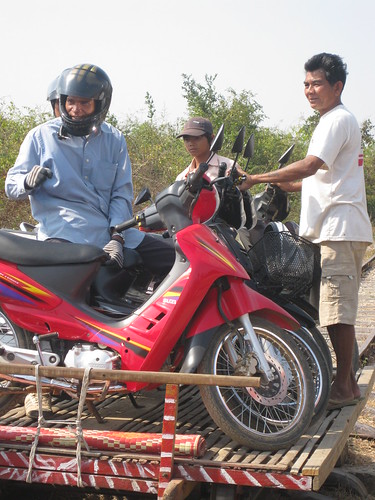 If you need to get somewhere by yourself, I’d recommend jumping on the back of a moto - there’s usually plenty of moto-dops (moto-taxis) around tourist areas and major intersections. It can be a little scary at first, but the drivers know what they’re doing, and it’s much faster than a tuk-tuk. The more you travel this way, the more comfortable it gets.

Prices vary between cities - I could generally get from one end of Battambang to the other for fifty cents (two thousand riel). For the same distance, a dollar is probably the least you’ll get away with in Phnom Penh (and it’s also a much larger city). Sometimes the driver will request a price, sometimes you just offer what you think it is worth - and bargaining is fine, although you may not get far due to the language barrier. 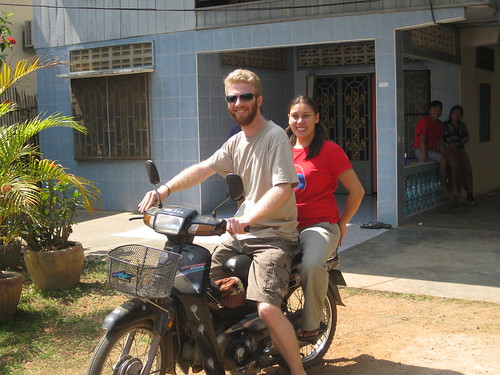 Much like the ride itself, estimating what to pay for a trip becomes comfortable over time.

If there’s a group of you - and particularly if you have luggage - then a tuk-tuk is the better option. You’ve got a bit more space, and it’s definitely safer than a moto - but the caveat is that it’s more expensive, and it’s slower. I didn’t travel by tuk-tuk too much, so I’m not the best source for prices, but I’d expect to pay a dollar or two to get across Battambang, maybe a little more if there was a group of us.

Both moto and tuk-tuk drivers are often happy to wait for you for the return journey - if that’s what you want, don’t feel obliged to pay until you’re finished with their services. You should pay them a bit extra for waiting, though.

A simple example: If I was visiting the Russian Markets in Phnom Penh, and then heading back to my hotel, I’d probably pay three or four dollars all up for a moto-dop. For a similar visit to the markets in Battambang, two dollars should suffice. Of course, prices may have gone up since my last visit, and I can speak a little Khmer, so I’m more comfortable with bargaining. Don’t be surprised if you’re asked for double those amounts, or more.

When you’re stuck with the language barrier, it can be a bit hard to describe where you want to go (particularly in a city you’ve never been to before). Regular moto-dops and tuk-tuk drivers will know all the common tourist places, so generally you’re going to be fine.

If the driver doesn’t know where to go - and sometimes they pretend they do know - they’ll usually ask other Khmer for help. However, often the drivers hanging around tourist areas are experienced enough (particularly in Phnom Penh and Siem Reap) that you won’t have problems.

You definitely won’t struggle to find moto-dops or tuk-tuks - there’s always a few outside each hotel, and they’re quick to offer their services (read: hassle you incessantly). Sometimes, that’s fine, because you do need transport. Other times, it’s easier to just say ‘no’ (A’tay) or ‘I don’t need’ (A’trega).

You’ll also find some drivers ask if you want to visit tourist places, and offer to take you there (and if you’re busy, give you their number or ask when you’re free the following day). This can be handy - it’s nice to have a familiar driver taking you around - but if you don’t want to commit to any plans, make that clear, don’t just say yes to avoid confrontation.

If you’d like to get around without a driver, it’s not hard to find places that hire out motos and bicycles (and perhaps dirt bikes for the out-of-town trips). Cambodia is quite flat for the most part, so it’s not hard to peddle your way through cities, but Phnom Penh’s traffic (much more so than Battambang or Siem Reap) heightens the challenge. You’ll also need to worry about locking the bikes up, so it may not be worth the hassle.

Finally, if you’re planning on crossing the border overland from Bangkok, via Aranyaprathet (on the Thai side of the border) and Poipet (the Cambodian equivalent), it’s a bit of an adventure. I’ve done it a couple of times - the easiest way is by taking a bus that goes all the way to Siem Reap or Battambang (well, it’s actually two buses, since they don’t cross the border, but guides will look after you somewhat).

An alternative is to take a non-tourist-focused bus from Bangkok to the border, and then find a taxi once you cross over to Cambodia. This is more challenging - there’s some scam buses and taxis that charge a lot more in Poipet, so I’d recommend the bus.

If you’re going in the other direction though, taking a taxi to Poipet is easy enough, and then you can get a tuk-tuk to the bus stop in Aranyaprathet. No matter which direction you’re going in, Tales of Asia’s guide is essential reading.

That’s it for my generic Cambodian posts - the last two of this series will focus on dining and activities in the town of Battambang (as that’s where I spent the vast majority of my time).

Thanks to James Healy for the moto photos above.

This is bloody fantastic.

Actually, I have nothing more to say than that.

Well written dude, perfect. Best one yet. As someone who was a fair bit apprehensive about venturing to Cambodge before I got there, I can safely say that this post will allay even the largest fears.

Prior to this: PublicSphere: Open Government